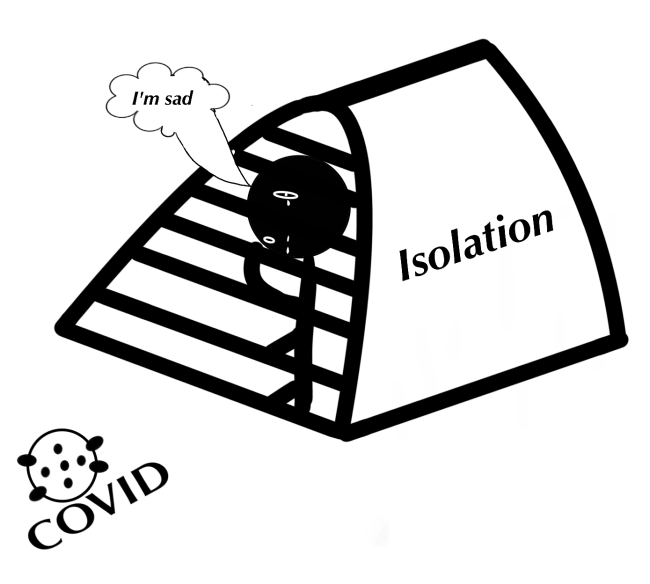 COVID-19 started around January 2020 and the cases have increased so much that it has forced most of the world into quarantine. This quarantine has created a society where people are unable to interact with each other properly. As social animals, humans require interaction, and this situation is detrimental to people’s social lives.

People have only just begun adjusting to their new schedule, so it may not seem like there is any effect on the mental health of a person, this is because people’s mental health will slowly deteriorate over time. This is shown when a professional poker player, Rich Alati, bets one hundred thousand dollars that he can last thirty days alone in a dark room with everything needed to survive. “He was kept in a small, completely dark room with nothing but a bed, fridge and bathroom. Even with all the resources he needed to survive, Alati couldn’t last the month. After twenty days he negotiated his release, taking a payout of US$62,400. There are countless negative effects that social isolation and extreme isolation can have on our minds and bodies. Alati was no exception, reporting that he experienced a range of side effects, including changes to his sleep cycle, and hallucinations. ”, as the article said, Alati could only last twenty days, and even then, he had hallucinations and his sleep cycle slowly changed, which negatively impacted his body too. Also, according to a meta-analysis co-authored by Julianne Holt-Lunstad a professor at Brigham Young University, lack of social interaction can lead to health problems as risky as obesity, smoking fifteen cigarettes a day or being addicted to alcohol. This proves that isolation has a great negative impact on mental health. This is why people need to interact more in tough times. Currently, the only way to interact without risk is to video call one another, but it is also possible to go out if you have a mask since it greatly reduces the chance of falling sick.

For these reasons we can see that in isolation, the mental health of people will slowly deteriorate without proper interaction with other people. To fix this problem, we must be active in interacting with others inside and outside of our homes.

About The Author: Pranav Bollineni is a student at Cupertino High School, and is going to eleventh grade. He is interested in how the world runs, and why it’s situation is quickly deteriorating. He wants to help fix the problems in the world and create a better place for everyone to live in.