is an approach to product/solution development that puts people first and focusses on user needs, desires and abilities at the center of the development process.

is an approach that aims to integrate social, economic and environmental factors, interrelationships, and phenomena into a comprehensive design solution.

This research paper intends to design an accessible innovation that allows for the prevention of Alzheimer’s disease in the general population. Alzheimer’s is a gradually progressive neurological disease that causes problems in memory, thinking, and general functioning by causing the brain to shrink. Today there are 55 million cases worldwide, and by 2050, it will officially become a global pandemic. And unfortunately, there is no current treatment that has proven to work, allowing it to become the sixth largest cause of death in America. Therefore, attainable prevention for the population is key in order to prevent this large rise in cases. The solution is a unique mobile application that will apply swarm intelligence, along with nature’s other time-tested strategies, to accurately diagnose and prevent Alzheimer’s disease. The apps on today’s market that attempt to be support systems or provide online games to assist Alzheimer’s patients don’t contain any accurate method of collecting real data from the user’s distinctive condition. This app is unmatched due to its implementation of an emerging type of artificial intelligence to healthcare to gather and analyze data from various parts of the user’s brain.  This data is then used to assist the user in creating a healthier lifestyle, indulge in specifically chosen games meant to strengthen the user’s neural connections and ultimately their cognition, and lastly, provide an analytic report for the user to take to their physician if intervention is required so the user is able to live a longer, more memorable life.

Due to severe droughts, desalination is an important source of freshwater. The problem is that for every 1-liter of fresh water produced, 1.5-liters of brine is also produced. The challenges incurred in brine disposal, prohibits the expansion of desalination plants. So, my question was, how to safely process and recycle brine, instead of dumping it into the environment? I explored various brine disposal technologies and found that Thermal-based Zero-Liquid-Discharge treatment had comparatively fewer side-effects. I decided to use Biomimicry to further improvise this method. I mimicked the Himalayan Salt Mountain, which had many minerals in it. I also learned that Himalayan salt tiles/bricks are currently being used in constructions. My hypothesis was, “If the salt along with the mineral impurities in the brine is first crystallized, then it can be hardened to form bricks.” My experimentation with household materials, showed that the recrystallized salt with added mineral did not hold strong, so I explored the addition of other compounds to speed up the hardening process. I adopted Green Chemistry principles and tested starch. The coagulation happened without any additional energy and just used water as a solvent, and also the hardening process consumed 50% less heat energy. I now had an effective biomimicry and green chemistry-based brine rock creation process! In order to eliminate any environmental impacts, I designed a Crystallization Tray to ensure the whole process takes place in a well contained and controlled container. Solving the brine disposal issue will enable desalination plants to produce more usable freshwater. 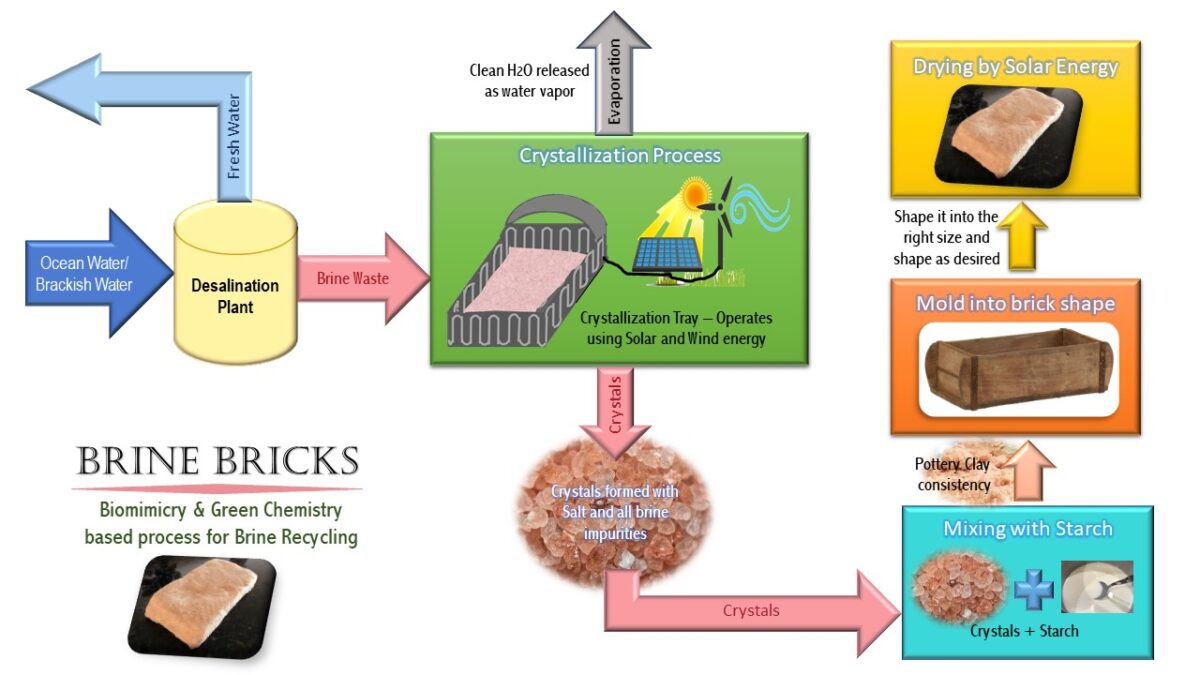 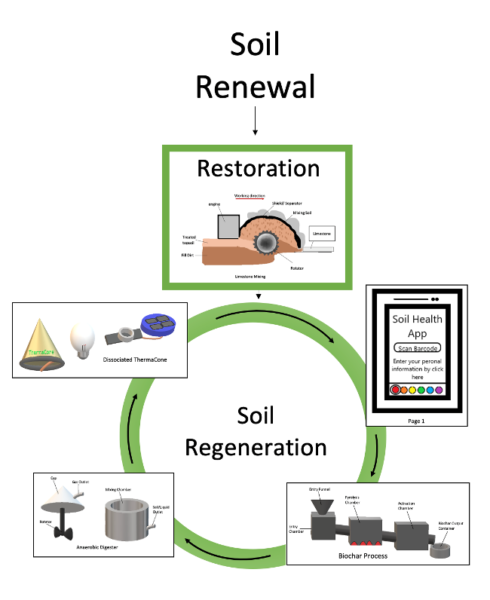 The objective of this research article is to address the problems of agriculture soil degradation, and the lack of soil regeneration. Due to recent increase in chemical usage, the soil and crop quality has substantially degraded, which ultimately affects our health. My solution is a two phased approach to first restore the soil and then keep it in a cyclic regeneration process. By utilizing biomimicry, green chemistry, and design strategies, the multi-step soil restoration process can be implemented to extract unwanted chemical pollutants, restore microorganisms, and preserve water and nutrients. The next phase of soil regeneration utilizes cloud computing and strategies from nature. Sensors are used to monitor soil levels and the data collected is analyzed through an Artificial Intelligence based cloud software. Current soil levels and the specific corrective actions are communicated through a mobile app, taking out any guess work in managing soil quality. The innovative device to increase the attractiveness for pollinators and the cyclic regeneration process helps improve and maintain the soil quality for better crop yield in a sustainable and eco-friendly way.